Lane is one of the members of Lucas Casterwill's team along with Dellix.

Lane served as a guardian of the Casterwill library in Paris, France, alongside Dellix. The two of them permitted Sophie Casterwill to enter, without their intervention, upon seeing her enter the enchanted doorway which would only permit a member of the Casterwill family to pass. S1E18

Lane is obedient to Lucas, but can and will stand her ground when she thinks he is wrong. However, she is more meek than Dellix, and less likely to speak out if she thinks Lucas is wrong. She seems to get sad when Lucas makes harsh decisions, but also has some faith in him and knows that he will change his mind seeing that the way he refused to go is correct. She and Dellix have some influence on Lucas' behavior. She seems to be close to Dellix as they're often seen together. She may also be close to Lucas due to her backward glance in the episode "Spiral War" as she and Dellix ran off to go and fight.

Lane seems to prefer far-ranged combat styles such as using Titans and spells as opposed to using martial arts or physical strength. 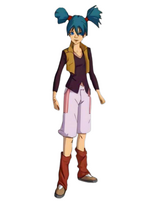 Lane with her team

Lane and Lucas
Add a photo to this gallery

Her name means "roadway, path" in English or "wool" in French. It is of Gaelic origin