Start a Wiki
Lich is a Krono-Titan whose appearance is that of a decayed skeleton of a Greek soldier. Lich is known to be the guardian of the tombs, notably the Tomb of the Undead.

Lich Titans were found to be guarding the Tomb of the Undead. PRO-19B

A skeleton very similar to Lich was seen lying dormant in the shadows of the cave of the Oracle near the Temple of Poseidon in Greece. Lok Lambert was startled by the sight but did not assume it to be a Titan. S1E20

Lich is able lie dormant for years as a decayed corpse. However, once awake, he is able to devour his enemies or use his Life Drain ability to drain his enemies of their energy. He is also armed with a damaged but lethal sword. PRO-019

Click here to view the full Gallery for Lich 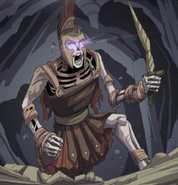 A similar skeleton in the Oracle's cave
Add a photo to this gallery
Retrieved from "https://huntik.fandom.com/wiki/Lich?oldid=89448"
Community content is available under CC-BY-SA unless otherwise noted.