Lin Storm is the granddaughter of Master Storm and lives in the Taihang Mountains of China.

Lin was trained alongside Dante Vale by her grandfather. S2E43

Although at first Lin acted very suspiciously, tough and even violent, she later revealed herself to be rather friendly. Neverthless, she is still not the person to mess with, as during the fight she gets alert and ready to stand her ground. She is very proud of her origin and family and respect her grandfather. However, she also appreciates other strong people. She seems to have a crush on Dante, as she compliments him and brings back memories from their previous meeting.

Lin is an accomplished martial artist, able to hold her own against Dante Vale, as well as assist in his training. She can use Seeker powers. Her spells are associated with knife-throwing, at which she excels. 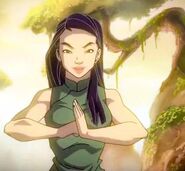 Lin training Dante
Add a photo to this gallery

Retrieved from "https://huntik.fandom.com/wiki/Lin_Storm?oldid=71282"
Community content is available under CC-BY-SA unless otherwise noted.