Lok Lambert is the son of the legendary Seeker, Eathon Lambert, and Sandra Lambert. Driven by the mysterious disappearance of his father, Lok joined the Huntik Foundation, soon rising to become one of their strongest Seekers.

Lok is a boy with blond hair and blue eyes. His usual attire includes an unbuttoned white shirt over a long navy undershirt, a pair of brown bracelets, blue cargo jeans with a loose brown belt, and gray sneakers with red highlights. S1E01 Occasionally, he also wears a two-toned brown jacket. S2E31 For some desert missions, he wears a two-pocketed white shirt tucked into a pair of khaki cargo shorts. S1E22

Though born into a family of Seekers, Lok and his sister, Cathy Lambert, remained blissfully unaware of his latent Seeker abilities. Only knowing his father, Eathon Lambert, to be an explorer, Lok often dreamed of going on a adventures and discovering what happened to cause the disappearance of his father. Living as an ordinary teenaged student at Venice Preparation Academy, he developed a crush on Sophie Casterwill, who had been unaware of him, despite his sitting behind her in class for mathematics one year, science the next year, and history the following year. S1E01

When Sophie and Lok went to Lok's dormitory to study, one of Lok's father's ancient vases accidentally was broken, revealing the Amulet of Kipperin and Eathon Lambert's journal hidden within and immediately placing them on the Organization's radar. Forced to flee from the Organization with Sophie, Lok Lambert was forced to sprint around the city in search of answers and for safety from the enemy Seekers. Those answers came to him in the form of Dante Vale, the Huntik Foundation's most renowned Seeker. S1E01 Dante then gave Lok the Amulet of Freelancer who would become a favored Titan of his on many adventures. Though Lok was unable to pay for Dante's services, Sophie paid Dante to investigate the disappearance of Lok's father, Eathon, and to train the two as part of the Foundation. S1E02 Lok soon learnt to use his first power, Everfight, and invoke his father's Titan, Kipperin to defeat the Organization. S1E03

Through working as a team on numerous missions, Lok became fast friends with Dante, Sophie, and later Zhalia Moon. S1E15 On a mission to the Castle of Vlad Dracul when Zhalia revealed herself to be working undercover for Klaus and fought against Sophie, Lok leapt in between the two and managed to stop Zhalia from delivering the final blow and help bring her back to her senses. S1E17

After taking on Rassimov in the Mausoleum of Sir Lancelot, Lok was almost killed after being sent by a Bladewave through a wall but luckily escaped with just a head injury. The wall he went through revealed the inscription for the power Findshape which Sophie was able to master and use to repair the journal. S1E18 S1E20 S1E20

Following Eathon's journal entries, the team travelled to the Temple of Poseidon in Greece where Lok fell down into the cave of an The Oracle before discovering the Amulet of his father's Titan, Baselaird. The team then travelled down to Atlantis where Lok discovered that his father never made it as far as passing the four tests of Lord Casterwill and that he might never find him. In his rage, Lok was able to independently defeat Rassimov. Sophie revealed her feelings for a saddened Lok, and with her encouragement, he found the strength to complete his father's goal and use his puzzle to obtain the ancient Amulet of Will. S1E21

After following a clue about the Ring of Tao from Eathon Lambert's journal to King Solomon's mines in Ethiopia, Lok and the team travelled to claim the Legendary Titan of Spirit. In order to get past the trapped entrant to the vault, Lok and Sophie had to dress as King Solomon and the Queen of Sheba and express their true feelings for one another before Lok went on to bond with the Legendary Titan, defeating the Organization in the process. S1E23

Through investigating the history of the Organization, Lok and the team eventually discovered that the Professor was in fact Simon Judeau, the original teammate of Metz and Eathon. and that he possessed the Ring of Araknos, the Titan of Mind. After an altercation with Blood Spiral Seekers, Shauna and Wind, Lok lost possession of Eathon Lambert's journal and the Amulet of Will. S1E24

In a dangerous mission to find out the truth about Metz' curse, Lok and the team travelled to The Professor's castle and where they learnt of Overlos, the Titan of Immortality, whose invocation would lift the Curse of the Legendary Titans. After Dante broke down after being tricked into giving the Professor the Rings of Behemoth and Tao , Lok led the team in an offensive strike to stop the Professor once and for all. During the battle, Lok was sent through a wall and rescued by Cherit who brought to the Professor's private room. It was here that he discovered his father's Holotome and the Amulet of Dendras and he devised a plan to defeat Simon. Lok then returned and, with the help of Dante and Zhalia, put his plan into action, taking control of Overlos and banishing him and the three other legendary Titans to the Spirit World. In the process, Araknos, dragged the Professor away with him, despite the efforts of Lok and Dante to save him. After returning to Venice, Lok determined not to give up on his search for his father. S1E26

After the fall of the Professor, Lok continued to work with the Huntik Foundation and to look for his father. His search led him and his friends to the jungle of South America, the site of his father's disappearance. There he discovered the Nexus, a gateway to the Spirit World, Huntik, and was finally able to talk to his father, who told him to lead Casterwills to the Spiral Mark. S2E27 Later, Lok continued to receive messages through his father's Holotome which he had found in Professor's castle. S1E26 They led him to discover the Nostradamus quatrains, which mentioned Avalon. S2E28

The new search led Lok and the team to Nimue Casterwill, who helped them to find the island. On Avalon Lok managed to draw the Willblade, thus becoming Champion of Casterwill. He battled Wilder but couldn't remember anything later. S2E30 He continued his Casterwill quest, however, finding Quetzalcoatl, Umbra, and Phoenix on his way and helping Sophie find her confidence and win over her family. Due to Dante Vale being occupied in the Sea of Cortés, Lok led a mission in Hamelin, Germany, winning the trust of his friends as a leader. S2E43

In Tír na nÓg, after falling into a hole between dimensions and then talking with his father, he finally remembered what had happened on Avalon and that he is the new Champion of Casterwill, allowing him to use Pendragon and save the team. S2E48 After finding the last quatrains in Salon, France, he teleported with the team to Siberia and, fooled by quatrains left by the Betrayer, used the Willblade on the Spiral Mark, awakening it and the Betrayer. S2E50

After Dante's death and Betrayer's insulting words he became angry and delivered fiery speech, pulling everyone together again, but his spirits dropped when Betrayer revealed that quatrains were fake and that Holotome was indeed a Titan known as Demigorgan. Only after discovering that at Tír na nÓg his father was real Lok snapped back and called Quetzalcoatl, destroying Demigorgan's Amulet. This action, however, weakened Lok, causing him to doubt himself, but his friends' support and Dante's later return reinvigorated him. After finding the real prophecies of Nostradamus on his Holotome and discovering a means to defeat the Betrayer, he used the Willblade again and managed to defeat the enemy, saving the world. One month later took over leading the Huntik team after Dante's departure as a member of the Huntik Foundation Council. S2E52

Lok was just a normal, fun-loving high school student, struggling to stay awake in his classes and wishing for a life of adventure. After finding his father's Amulets and becoming a Seeker, Lok puts his enthusiasm, intuition and natural talent to the test as he is introduced to Sophie Casterwill, Dante Vale, and the world of Seekers in Huntik. S1E01 Lok eventually developed a close brotherly bond with Dante S1E18, whilst becoming best friends with Cherit with the latter always at Lok's side throughout their numerous escapades together. S1E20 Being able to relate to being a novice in the Seeker world, Lok became a big brother to Den Fears, supporting him and teaching him new spells. S2E36

He is usually quite even tempered, but he can be remarkably aggressive when sufficiently angered. This is seen both when he gains perfect control over Lindorm, who bonds best when his Seeker is angry S1E12, and when he believed his father was dead at the hands of the Organization. S1E21

During his childhood, Lok gained an uncanny knack for puzzles through playing games with his father. Lok's puzzle skills include being able to solve a crossword puzzle in ninety seconds, whereas Sophie Casterwill was having difficulty working with the puzzle. S1E01

Lok was initially slow at learning his Seeker abilities through research. Learning best while under fire, however, Lok has improved by leaps and bounds through experience in the field on his way to becoming a top Huntik Foundation Seeker. Through training and missions, Lok has risen quickly to become quite skilled at using magic as well as bonding with the Amulets of Titans. Since joining the Huntik Foundation, he has also trained with Sophie and Dante on various methods of combat including martial arts, and fencing. When these skills and his Amulets are not enough, Lok calls upon Cherit for wisdom and advice and the Willblade which he wields as the Champion of the Casterwill family.

Click here to view the full Gallery for Lok Lambert 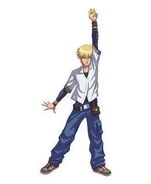 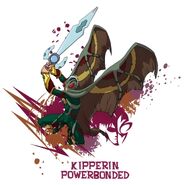 Retrieved from "https://huntik.fandom.com/wiki/Lok_Lambert?oldid=79069"
Community content is available under CC-BY-SA unless otherwise noted.