Lucas Casterwill is the older brother of Sophie Casterwill. He became orphaned at a young age when his parents were killed due to a massive fire at their mansion in Paris caused by Kiel, a member of the Blood Spiral.

Lucas grew up looking out for his younger sister, but were separated when their parents' house was burnt down by Kiel and his Casterwill Hunters. Sophie was rescued by her bodyguard Santiago but Lucas was believed to be dead. However, he had, in fact, survived. S2E31

Lucas Casterwill kept his existence secret, leading his sister, Sophie Casterwill, to believe he had died in the fire just as he, himself, had believed her to be dead prior to her joining the Huntik Foundation. A year after finding out she was still alive, Lucas and his team, Dellix and Lane, attacked her and the Huntik team in the Casterwill Library in Paris, in a bid to stop them pursuing the family's secrets, for her own safety. He revealed his identity before revealing that his team needed to recover the evil Amulet of Void. S2E31

At the Casterwill meeting at the Fortress of Iron Will, Lucas was against fighting openly against the Blood Spiral Brotherhood. When Sophie challenged, he tested her with the Trial of Courage, a dangerous quest that he himself had failed. S2E39 When Sophie returned with the Legendary Titan of Bravery, Mythras, Lucas remained skeptical. His views changed when he saw her hold her own in the battle with Kiel and give Mythras to Vivian Casterwill. He then decided to put his faith in her as the leader of the family. S2E40

On the longest night of the year, Lucas travelled with his team to the Spiral Mark in the Scramjets. S2E50 As the battle ensued against the Blood Spiral, Lucas was badly injured by Wind. S2E51 After being revived by Lady S. with her Everheal power, Lucas joined Sandra Lambert in the final battle against The Betrayer. However, he became petrified by the Betrayer's Shadowlock power for a remainder of the conflict. After the Betrayer's defeat, he was released and seen celebrating with the rest of the Casterwills and the Foundation. S2E52

Lucas is proud of his heritage, and very sure of his own power, much like his younger sister. He thinks himself to be more powerful than Sophie, and tends to be sharp towards her, treating her like a child, although it is unclear whether he actually is more powerful than her. Though his strict behavior comes more from worry for her safety than from coldness. However, he doesn't know how best to protect her. During Sophie's Trial, when Focauld asked him why he told his sister of the test while he didn't believe in her succeeding in it, he explained that he hopes that when she fails, she will see his point and agree to back off from the fight. He is more of a talker, or rationalist and opposses the idea of open war with Spirals believing that the best way to save the family lies in staying in hiding. He usually prefers to stay away from fights, but he can be persuaded to help, which is shown in "Chasing Void" when after Zhalia's speech he joins in with Huntik team, and in "Spiral War" when he reluctantly follows Dellix and Lane, joining others in fight against Spiral army, though he states he'll never forgive his friends for that. He seems reluctant to leave his team to fight alone. Eventually he agrees to join in the fight after seeing his sister hold her own. He then admits he was wrong and he swears his loyalty to her, showing beyond a shadow of a doubt that he was not too proud to acknowledge when he is wrong and when someone shows their worth. He's also not too proud to ask and beg, given that he had begged his sister to go into hiding after she safely got back from Klaus's lab. S2E32 He is above all a noble and reliable person.

As a member of the Casterwill family, Lucas has access to powerful Casterwill magic. His abilities also allow him access to powerful Titans, although he was unable to pass the Trial of Courage and bond with the Legendary Titan of Valour, Mythras. S2E39 Despite his hesitance to engage in direct fighting, due to having witnessed the pure destruction and chaos caused by the Blood Spiral, he is a highly skilled and capable fighter with a strong strategic nous and leadership skills. S2E40 S2E52 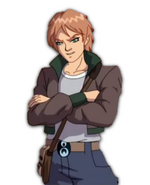 Lucas as a child

Lucas and his team, Dellix and Lane

A copy of Lucas in the Fortress of Iron Will