Start a Wiki
Marauder is one of the principle Titans used by the Silent Soldiers of the Blood Spiral. Marauder's body is enveloped in a dark cloak and his face is covered by a strange mask. Marauder and Harlekin are together used like the Redcap and Mindrone Titans used by the Organization. Like Harlekin, Marauder draws power on its Seeker's negative emotions, especially rage. He is related to another Titan known as Psikofen.

While recruiting orphans in Rotterdam, Tantras gave Harrison Fears a Marauder Amulet, stating that rage was necessary to bond with Marauder and using Underfear to help him focus his emotions. Harrison then invoked Marauder. When the other two orphans invoked their Harlekin Titans, which Tantras had given them, Marauder wrestled a Harlekin to the ground. Later Harrison used Marauder to defeat a Fog Monster which Tantras had summoned. S2E33

In the dreamworld created by Arc, the Legendary Titan of Fate, Sophie Casterwill encountered mutated hybrids of the upper body of Marauder and the the lower body of the Black Scarabese. Sophie witnessed vast armies of these Spiral Demons attacking her family before she stamped over them, causing an imbalance within the dream. S2E34

Numerous Marauder Titans were used in the battle outside the Fortress of Iron Will. One Marauder was seen wrestling Templar when Nimue Casterwill sacrificed herself. S2E40

Two Marauder Titans were used to guard Tantras as he attempted to harness the power of the Heart of Vlad Dracul. The pair were later sacrificed by Harrison Fears, using Bloodrank, to power up Powerbonded Antedeluvian against the Huntik team's Titans. S2E43

Several Marauder Titans were used in the battle at the Spiral Mark at the Blood Spiral Base. One Marauder attacked Fenris only to be defeated by Firbolg. Two Marauder Titans later fought Powerbonded Baselaird. After a heated confrontation, Baselaird defeated the two of them. S2E51

Marauder can run extremely fast and recover swiftly from attacks. This ability allows him to chaotically storm through the battle field with his arm blades slashing down enemies. Marauder is skilled at using the blades in sword combat, able to hold his own against Powerbonded Baselaird. S2E51 These blades can shoot lightning bolts when held in close in contact, powerful enough to defeat Powerbonded Sabriel. S2E32 His special ability Perfect Vision gives him an edge in combat, enabling him to spot an incoming enemy from afar and plan a subsequent attack. 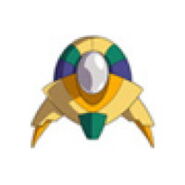 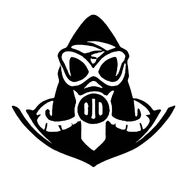 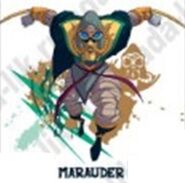 Marauder
Add a photo to this gallery

Retrieved from "https://huntik.fandom.com/wiki/Marauder?oldid=89622"
Community content is available under CC-BY-SA unless otherwise noted.