Start a Wiki
Mason is a Litho-Titan who is a torso that moves via self-propulsion. His body is made up of stone bricks, and his arm is capable of firing energy blasts.

Mason once took on a group of Suits, including Mr. Mactavish and unnamed Suit 002, who were hiding behind a wall. However, Mason blasted through and revealed the Suits before taking them down. LGS-037

Mason possesses a lot of physical strength and arms that can fire energy blasts. He can easily break through the walls of a house. Like Metagolem, he is best used when his Seeker in great danger and has nothing left to do. In addition, Mason is able to fly. 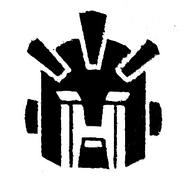 Mason
Add a photo to this gallery

Retrieved from "https://huntik.fandom.com/wiki/Mason?oldid=79055"
Community content is available under CC-BY-SA unless otherwise noted.