Medusa is a Titan from Greek mythology. Medusa has a human-like torso with the tail of a serpent. Her hair forms a large snake head. A Medusa Amulet is in the possession of Lok Lambert.

Medusa inspired the Greek myth of the Gorgon, a monster with snakes for hair which could turn its onlookers to stone. Wikipedia Medusa's Amulet was believed to be missing since the time of the ancient Greeks. S2E35

The Organization tracked Medusa's Amulet to a cave on Medusa's Island. However, Wilder planned for his right-hand man, Stack to obtain the Amulet and offer it to the Blood Spiral so as to join and infiltrate the group for his own end. Although Wilder and his team were defeated by the Huntik team, Stack and Kiel reached the cave and called out Medusa. In an attempt to beat Medusa, Stack invoked Divine Mirror Kagami. However, the Huntik team were able to hold off Kiel and, as Stack fought Medusa, Lok was able to obtain Medusa's Amulet in an orb located in a statue of Medusa. After Medusa defeated Kagami, Lok called Medusa back to the Amulet. S2E35 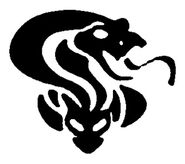 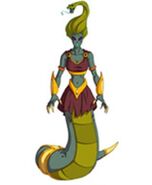 Medusa
Add a photo to this gallery

Retrieved from "https://huntik.fandom.com/wiki/Medusa?oldid=90288"
Community content is available under CC-BY-SA unless otherwise noted.