Start a Wiki
Megladeath is a gargantuan Litho-Titan sea-monster that resembles a blue-bodied plesiosaur with a red head. The undisputed lord of the sea, Megladeath is used by the Organization for aquatic combat.

Megladeath was used by Captain Caine in the ocean to fight two Triton Titans summoned by the Huntik Foundation that they has recovered from the sunken lighthouse of Alexandria. HC#04

Caine later invoked Megladeath to on the mysterious Titan island where it defeated Dante Vale's Caliban. He then fought Triton before being defeated by Montehue and the Huntik team. HC07

Whilst searching for the Flying Dutchman, Diaz's Suits summoned Megaladeath alongside Redcap and Mindrone to attack the Huntik team in the sea. HC#13

Sporting deadly sharped teeth and massive spiked fins, Megledeath is the ideal Titan for underwater combat, with few Titans being able to hold their own in the water with him. 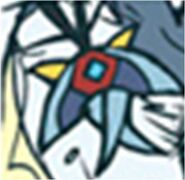 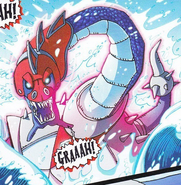 Retrieved from "https://huntik.fandom.com/wiki/Megladeath?oldid=90046"
Community content is available under CC-BY-SA unless otherwise noted.