Metagolem is an incredibly powerful Titan, but he can be difficult to summon unless his Seeker is in great danger. Confirmed equivalent Titans to Metagolem include the aquatic Coralgolem, the larger Undergolem, the experimental Brahe, and the smaller Chaingolem.

Metagolem Titans inspired the Jewish myth of the golem, creatures of clay endowed with life, although the modern folklore may refer to any creature brought to life through magic. Huntik.com According to legend, a weak Seeker once summoned a Metagolem Titan which, unable to be controlled, nearly destroyed an entire city. source? Jodis Lore obtained one such Amulet, and at some point hid it within a vase in the Golem's Attic in Prague, Czech Republic. S1E03 In the Czech Republic, Metagolem came to be known for defending the Jews living within Prague. Huntik.com

Eventually, Dante Vale uncovered Jodis Lore's Metagolem Amulet while looking following a clue left in Eathon's journal. S1E03 After bonding, Dante has since used this Titan in battle during rough situations. S1E12 Dante once hid Metagolem under the sand to surprise Grier when they fought on Sutos Island. S1E12

Metagolem has an attack power of 5 and a defense power of 6. Huntik.com Being a Titan made almost entirely out of rock, he is extremely durable. This grants Metagolem immense amounts of physical strength in conjunction to its large size. Unfortunately this also makes him very slow. As such, he is usually called upon by Dante for heavy jobs.

Metagolem was designed to be a large, powerful Titan made of dense rock. Though originally imagined as brutish and even clumsy, his design was tweaked to be much more impressive. He also was given gold-accented armor. Huntik.com. 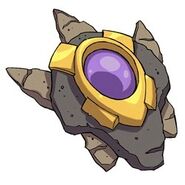 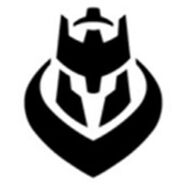 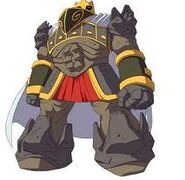