In the mid-late 1950s, Metz, as a young Seeker, became acquainted with Simon Judeau and young Eathon Lambert, whom he met by chance on a street in Venice, Italy. Forming an inseparable Seeker team, together the trio embarked on many adventures, travelling to many different locations, including Peru. Within the group, Metz served as the muscle, Judeau the brains, and Eathon as the intuition, S1E24 At one point in their travels, Simon saved Metz' life at the Temple of Tecobai during an attack from the Ecuadorian natives, by holding out his Caliban Amulet to stop him falling into a river of lava. S1E25

This all changed, however, the day that they tried to find one of the Legendary Titans, Araknos. Upon arriving at the Titan's resting place, Metz read the ancient scripts carved on the door of Araknos' Tomb and decided that they should leave the Titan. Simon however threw caution to the winds and forcefully entered the tomb but was cursed by ancient magic. S1E24

While Simon went into intensive care in the Huntik Foundation, Metz went off to try and find another Legendary Titan with the hope of harnessing its power to cure Simon. S1E24 On his travels, he saved the life of a young Amazon queen in Turkey. They got romantically involved, and he took her to the outside world, marrying her in the Cathedral of Notre Dame. She died some time after that, however. S1E19

Some time later, he met young Dante Vale and, seeing his potential as a Seeker, taught him Seeker abilities, even giving him the Amulet of the powerful Caliban. Metz eventually found the resting place of the Legendary Titan, Behemoth, however upon trying to take it from its resting place, he was cursed like Simon. S1E19

After this failed attempt at curing Simon's curse, Metz himself became critically ill due to the curse, which also attacked his will. He was placed under around the clock care under Lady S., a Foundation medic. Throughout this time, Metz received regular visits from Dante Vale, who promised to find a cure. During one of these visits, Metz was introduced to the new Huntik Foundation inductee, Zhalia Moon. After the actions of Lok Lambert sending the Legendary Titans back to the Spirit World, Metz made a full recovery from his afflictions was able to take part in celebrating the defeat of the Organization and the Professor with the rest of the Huntik Foundation. S1E26

Afterwards, Metz returned to his place as head of the Huntik Foundation Council where he discussed the Blood Spiral Brotherhood with the council and presented the masked council member to the rest of the council as Teien Casterwill. S2E37

Metz told Dante that he believed that stopping the Organization was more important then saving his life. S1E17 When he was a trio with Simon and Eathon, he was considered the "muscle man" of the team (Simon was the intelligent one and Eathon the intuitive one). S1E24

His old friend, Master Storm, called Metz a lady-killer and a daredevil, indicating that in his past Metz was a brave man and hit with the ladies. S2E43 He seems to be a real gentleman, has excellent manners, charm that appeals to women and a good sense of humour. He is also well-liked by his colleagues and subordinates. S2E37 He is a great leader, always a step ahead his subordinates. When Momax feared that the teams are too small, Metz told him that he already took care of it. S2E28

In his teenage years, Metz provided the muscle and combat ability in his Seeker team. S1E24 As the leader of the Foundation, Metz now has a highly developed repertoire of spells to choose from and a vast collection of Titans. He was a skilled fighter back in the day and still bravely takes to the field when necessary. S2E52 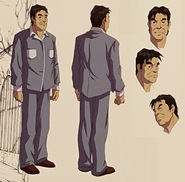 Metz as a young man

A photo of Metz's wedding to Hippolyta's mother

Metz, chairman of the Huntik Foundation