Start a Wiki
Midnight Rook is a flying Litho-Titan with a grey head and breast, and wings as dark as its name suggests. This expeditious Titan is deft at tracking and spying on its enemies, all the while retaining an unnerving solidarity and covertness. With razor-sharp talons and even sharper eyes, this Titan is primarily used by Marduk and the Casterwill Hunters of the Blood Spiral.

Midnight Rook was invoked by the Casterwill Hunters to fight Lok Lambert's Ironsquire and Dante Vale's Caliban, but was defeated when Caliban jumped on top of it. S2E37

Midnight Rook was used by Marduk to track down the Huntik team on the way to the Temple of Sun in Teotihuacan, Mexico. S2E38

Midnight Rook again was used by a group of Silent Soldiers to spy on Den Fears and Dante outside the Fortress of Iron Will. After being followed back to its master by Dante's Solwing, it then fought alongside Harlekin but was shot down by Den's new Titan Cursed Archer. S2E39

Marduk used Midnight Rook again to fight in the strike against the Fortress of Iron Will. After assisting Cerberus in defeating Sentinel, Midnight Rook followed Marduk up the cliffs to chase Santiago. S2E40

Midnight Rook is a master of spying and agility. The incredible speed of his matches that of Solwing while his sharp claws and beak are extremely piercing. Due to his size, Midnight Rook is an excellent Titan for assisting in combat for the Blood Spirals, as well as making a great stalker. S2E38 S2E39 S2E40 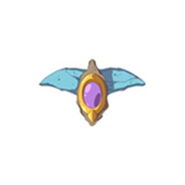 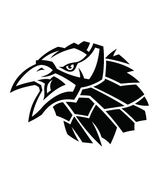 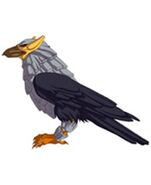 Midnight Rook
Add a photo to this gallery

Retrieved from "https://huntik.fandom.com/wiki/Midnight_Rook?oldid=77147"
Community content is available under CC-BY-SA unless otherwise noted.