Start a Wiki
Milcom the Colossus is one of the three massive Colossi set up by the Queen of Sheba to guard King Solomon's mines against invaders.

Milcom, along with Ashtoreth and Chemosh, was left by the Queen of Sheba to guard the Golden Asp, the entrance to King Solomon's mines, the resting place of the Legendary Titan of Spirit, Tao. The three Titans lay dormant in the form of statues for many years. S1E22

The three Colossi were awoken after Cherit pressed the eye of the Golden Asp which had been found by Dante Vale, Lok Lambert, Sophie Casterwill. S1E22

After the Organization arrived, the Professor hypnotized the Colossi using his Ring of Araknos, sending the guardians to attack ​Dante Vale and his team. After punching Lindorm, Milcom was tripped over Caliban and stunned by Lok, Sophie, Icarus and Venadek. He was then defeated by Caliban and Venadek together. S1E23

Milcom is strong and powerful, able to wield a large staff to knock back his enemies. Milcom's "Colossal Stride" ability allows him to run at great speed and cover great distance, despite his bulky size. S1E23 He also has the distinction of being the strongest, offensively, of the three colossi. 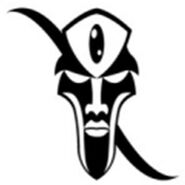 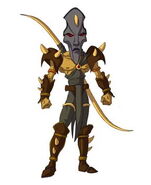 Milcom
Add a photo to this gallery
Retrieved from "https://huntik.fandom.com/wiki/Milcom?oldid=77206"
Community content is available under CC-BY-SA unless otherwise noted.