Mr. Koskin is an agent of the Organization as one of DeFoe's Suits.

Koskin attempted to retrieve Eathon Lambert's journal from Lok Lambert. He was among those who surrounded Dante's house. S1E01

Koskin attempted to stop the Huntik team but was in vain. S2E27

Like most Suits, Koskin was issued with the standard Titans of the Organization. 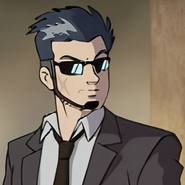 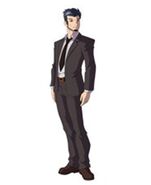