Nasher is a member of the Huntik Foundation Council. He currently quarters in Huntik International HQ in New York City. He is also in charge of the Foundation base in Salon Museum in Salon, France.

Momax was present during the holographic Council called by a bedridden Metz to congratulate them on their efforts against the Organization. S1E21

Nasher alerted the Council after receiving an emergency call from his Agents in Salon Museum after they were taken prisoner by Wilder and his Organization team. S2E28

Nasher joined the council on the longest night of the year to discuss plans to stop the activation of the Spiral Mark. S2E49 During the final battle at the Spiral Mark, he helped Clements and Billie. He stepped in to protect Billie and knocked out a Silent Soldier who was attacking her. S2E52

Following the defeat of The Betrayer, Nasher was seen with the council as they were joined by a new member, Dante Vale. S2E52

Nasher seems to be very protective of his subordinates. When they got attacked by the Organization, he seemed really concerned to bring help to them as soon as possible. S2E28 He is willing to save them no matter what the cost and even risks his life for them, such as when he personally protected them from the Blood Spiral. S2E51

Click here to view the full Gallery for Nasher 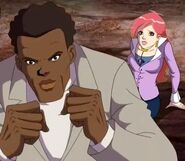 Nasher protecting Billie
Add a photo to this gallery

Retrieved from "https://huntik.fandom.com/wiki/Nasher?oldid=81505"
Community content is available under CC-BY-SA unless otherwise noted.