Nimue Casterwill, also known as the Lady of the Lake, was a member of the Casterwill family and the elder of the House of Blademakers. She also preserved the Casterwill Crystal Caves, which after her death became the responsibility of her granddaughter, Vivian Casterwill.

As the Lady of the Lake, for many years, Nimue resided in the Crystal Caves, with Vivian and their bodyguards, Mallory and White. S2E29

When the Huntik Foundation team came to England on the trail of the Willblade, Sophie Casterwill and LeBlanche met Nimue and Vivian deep in the crystal caves. Abiding by Casterwill law, Nimue tested Sophie and tasked her with recovering the Amulet of Sorcerel. After Sophie succeeded, Nimue called off Mallory and White from their attack on Lok Lambert, Dante Vale, and Zhalia Moon and agreed to help them on their quest to find Avalon. S2E29

After the arrival of the Organization, Nimue showed the team to the cliff face where the Dragon's Breath could be formed. However, she was interrupted by two Suits who threatened to open fire on her unless given access to cross the bridge. As the two Suits fell through the Dragon's Breath, Nimue reminded the team that it was only a guide and not a physical bridge. As the team departed to follow the light to Avalon, Nimue wished them luck and sent her Titan, Undine, to protect their boat. S2E30

Upon the activation of the Blue Star by Dante's team, Nimue and Vivian gazed at the star in amazement from the coast of England. S2E38

Nimue led the Casterwill meeting at the Fortress of Iron Will, where she voiced her unconditional support for Sophie and her idea of an offensive strike against the Blood Spiral despite the disapproval of Focauld Casterwill and the Rue Guardians, who opted to go back into hiding. After Sophie embarked on a quest to obtain Mythras, the Legendary Titan of Valor, and to claim leadership of the Casterwills, Nimue questioned why Lucas was so harsh towards Sophie. S2E39

When the Blood Spiral army attacked the Fortress, Nimue fought alongside Sophie, LeBlanche, and Santiago at the top of the cliffs. After Sophie and LeBlanche were overpowered, Nimue used all her power, using Soulburn to protect the Casterwill meeting giving the Rue Guradians and Focauld enough time to activate the Legendary Power to protect the Fortress. She later died using the Sacroblade spell. With her dying breath, Nimue encouraged Sophie, telling her not to fear her future, allowing Sophie to regain her confidence, powerbond with Sorcerel and invoke the Titan of Valor, Mythras. Following the end of the battle, a grieving Vivian took on Nimue's role of the Lady of the Lake. S2E40

Nimue was an extremely kind and wise woman and took great pride in her duty to her family, ultimately giving up her life to ensure their survival. She supported Sophie unconditionally and steadfastly believed in her, even in her dying hour.

As a Casterwill elder, Nimue possessed many of the spells of the ancient Casterwill tomes. Like Sophie Casterwill, she was to able to mentally sense magical forces, like the energy of Sabriel. S2E29 In addition, her favored Titan Undine the Water Spirit possessed a range water based abilities. S2E30 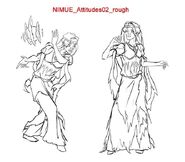 Nimue and her granddaughter, Vivian

Nimue's final words to Sophie
Add a photo to this gallery

Retrieved from "https://huntik.fandom.com/wiki/Nimue_Casterwill?oldid=81801"
Community content is available under CC-BY-SA unless otherwise noted.