Nordrake is a blue and white flying Litho-Titan that resembles an ice-dragon, held in reserve by the Professor for his final confrontations against the Huntik Foundation. Nordrake, along with the destructive Dominator, is one of the Professor's most powerful and favored Titans, besides Araknos.

Nordrake was an ice-dragon Titan primarily used by ancient Seekers in northern Europe. A Nordrake Amulet was acquired by a young Simon Judeau and became one of his first titans along with Dendras. Simon was wearing Nordrake's Amulet round his neck when he and Eathon Lambert first met Metz in his teens. S1E24

During a confrontation on a roof between the Professor and Dante Vale's team, Dante invoked Ignatius to overcome Araknos' ability to control his Titans. As a countermeasure, the Professor invoked Nordrake, whose ice abilities overpowered Ignatius and send him back to his Amulet. S1E24

When Dante's team prepared for their final confrontation against the Professor, Nordrake was studied on Zhalia Moon's Teknonomicon as one of the prime obstacles between them and the Professor's Legendary Titans. S1E25 During this confrontation, Nordrake was summoned along with Dominator in response to an attack by Sophie Casterwill and her only remaining Titan, Sabriel. Due to the effects of Dominator's Spikes ability and the barrage by Nordrake's Ice Blasts, Sabriel's Amulet was destroyed. As the rest of the team arrived and the Professor prepared to attack, Zhalia's Gar-Ghoul managed to attack Nordrake with a torrent of water. With Nordrake finally being defeated, Ignatius could then be used by Dante against Araknos. S1E26

Nordrake can breathe ice and cold air to freeze anything with its Ice Blasts. Being a dragon, Nordrake can also fly through the air with great prowess. It possesses razor sharp claws and teeth, as well as a strong tail that can be used as a club. 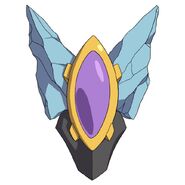 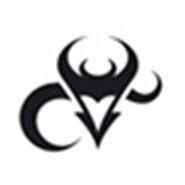 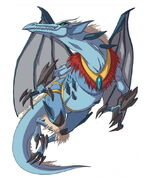 Nordrake's Concept Art
Add a photo to this gallery

Retrieved from "https://huntik.fandom.com/wiki/Nordrake?oldid=90632"
Community content is available under CC-BY-SA unless otherwise noted.