Pan is a Gaia-Titan resembling a faun or satyr. He has the hindquarters, ears and horns of a goat and the torso, arms, and head of a man.

In Greek mythology, Pan appeared as the god of shepherds, nature, hunting, and rustic music. Pan brought to the Greeks the panpipes, or syrinx, which this Titan is commonly seen holding. SAS-066

Pan is capable of utilizing his panpipes to create illusions of animals to dazzle and trick the enemy.

Pan is a satyr with a flute that can make illusions. In the rough sketch, Pan is in the foreground and strange creatures are starting to appear because of the magic of the flute that he’s playing. Pan is a Gaia-Titan and is part goat, so we asked the artist to make the illusion-creatures animals instead of people.

Here, you can see that Pan is wearing a simple Greek toga with geometric patterns along the hem. The illusion-creatures created by Pan’s music are animals; you can see a wolf, goat, and some birds starting to take shape. The extra detail needed on the illusions means the artist chose not to draw the background trees from the rough sketch—otherwise it would be hard to tell the illusions from the background. Planning ahead for the colored final art, we asked the artist to make sure the illusions looked like illusions so you didn’t think Pan hung around with a bunch of real wild animals.

Pan is a Gaia-Titan, and they are usually green and brown, so we decided to make him green all over. His illusion-animals look like they’re made out of energy so that you know they’re created from magic and not just regular animals. Pan looks like he’s playing a happy tune, as if he loves music just for the fun of playing. Huntik.com 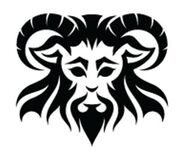