Pendragon is the Legendary Titan of Champions, whose Amulet was housed inside the Willblade, the legendary Casterwill sword of Avalon. As the Legendary Titan of Champions, Pendragon's Seeker must be a champion chosen directly by Lord Casterwill. Pendragon has now become Powerbonded to the current champion, Lok Lambert, having unlocked his true power during his final battle against The Betrayer.

Pendragon was originally the Titan of the Champion of Casterwill while the elder daughter of Casterwill held the Legendary Titan of Summons, Quetzalcoatl, in the Willblade. Together with the Champion, this Titan became a great help in the fight against the Betrayer and also against the Nullifiers. When the Nullifers were defeated, he used the power of Pendragon in the Willblade to seal the Blood Spiral's dark power. S2E50

Some time after the conflict, Pendragon's Amulet was placed inside the Willblade until a worthy Seeker could awaken the Titan once again. The young Seeker, Lok Lambert, was the one destined to bond with Pendragon as proclaimed by the prophecies of Nostradamus. S2E28

On Avalon, to save Sophie Casterwill's life, Lok took possession of the Willblade and fought off attacks from Incubane. Divine Mirror Kagami and Dendras, under the control of Wilder. He then invoked Pendragon who swiftly defeated the enemy Titans and broke Wilder's control over Dendras before returning to his Amulet inside the Willblade. However neither Lok, Sophie or Cherit were able to remember the events that took place. S2E30 In the Casterwill Library in France, Lok discovered Pendragon's Amulet after solving the puzzle on the Willblade's handle but could not detect a bond. Dante Vale tried to scan the Amulet on the Holotome but it was protected by an unfamiliar power. S2E31

While trapped in a dreamworld created by Arc, the Legendary Titan of Fate, Lok followed the advice of a spectral Eathon Lambert and invoked Pendragon to defeat a whole herd of Harlekin Titans and escape from the dream. S2E34 The mystery of Pendragon's Amulet was still puzzling him on the boat journey to the island of Medusa. S2E35 During a ritual led by the Rue Guardians, a spectral form of Pendragon appeared from behind Lok and Powerbonded Kipperin and defeated Kiel's Efreet King, once again saving Sophie's life. S2E40

While on a mission to capture Rassimov, Lok worried over the seriousness of being unable to invoke Pendragon. He later tried to summon him to stop Legion, the Legendary Titan of War but failed, with the team ultimately losing both Lindorm and Solwing to Legion's Titan Absorption ability. S2E47 Resting at Sandra Lambert's house in Ireland, Dante told Lok not to blame himself for the events with Rassimov. While lost in the Inter-dimensional World at Tír na nÓg, Lok was finally able to bond with Pendragon with the help of his father Eathon. However Eathon warned that the Blood Spiral might He then invoked Pendragon to save his friends from numerous Dullahan and Firbolg Titans. S2E48

During the final battle against the Betrayer, Pendragon's Amulet independently emerged from the Willblade to save Lok from Demigorgan, the Titan of Betrayal. Pendragon was then revealed to have become Powerbonded, defeating the Titan copies of Sabriel, Raijin and Gareon created by Demigorgan. The Betrayer, having fought Pendragon before, had Demigorgan create a Seeker mimic of his original Seeker, the Champion of Casterwill, preventing Pendragon from fighting. S2E52

Lok later invoked Powerbonded Pendragon to fight Myrmidon and Shadow Agent whilst looking for the Amulet of Kyojin in the ruins of Yonaguni. Although he managed to defeat Shadow Agent, Pendragon was then attacked by Grand Facade. After Lok found the Amulet, he summoned Kyojin, causing a huge whirlpool, knocking all of the Seekers and Titans backwards. HM#18

Because of his huge size, Pendragon possesses incredible strength and endurance. He can also fire energy blasts from his mouth. When the Amulet was inside the Willblade, it could manifest blasts of energy, shockwaves, energy shields and those powers could even dissipate powerful Titans with one strike. He can also break dark enchantments such as Divine Mirror Kagami's controlling Dendras. S2E30

Pendragon became Powerbonded with Lok Lambert during the battle against the Betrayer and Demigorgan. Through Powerbonding, Pendragon gained several new abilities:

Pendragon's size and figure also changed, making him physically stronger and able to walk on his hind legs more easily. He is thus far the only known Legendary Titan to have become Powerbonded. S2E52 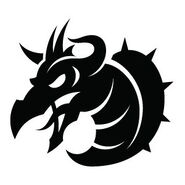 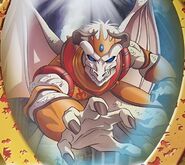 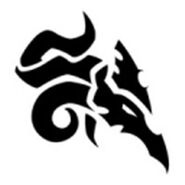 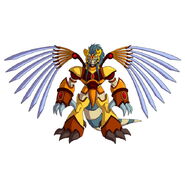