Start a Wiki
Ponderous is a brontosaurus-like Litho-Titan so big and slow that it takes a long time to summon him. Nobody has ever seen him start a fight, but this Titan often ends them.

Ponderous Titans were behind the legend of the Loch Ness Monster. Though made of stone, Ponderous loves swimming in Scottish lakes something he loves. SAS-016

Ponderous can bury itself underground and shoot out of the ground with ease. In addition to its colossal size, it is also a powerful swimmer.

Ah, dinosaurs. Big and slow, but really tough. If real dinosaurs were tough, how much tougher would one be if it were made of stone? Probably like Ponderous! This picture is a simple concept: a Seeker is summoning Ponderous, and he appears out of the ground (just like Metagolem!). We wanted Ponderous to look like a brontosaurus and not just a fat-bodied snake, so we asked the artist to make sure Ponderous’s front legs are showing in the later sketches.

Two details you notice right away are that the Seeker is Santiago and that Ponderous has rough-rocky skin that sometimes breaks off in big chunks. You can see his front legs, and together with the shape of his head he really looks like a brontosaurus. We’re almost ready to move on to the color version, but he just needs one more touch to show he’s a Titan and not some long-lost dinosaur: decoration. We ask the artist to put a stylized stripe around his neck and shoulders.

Ponderous is now a nice rocky brown color, busting out of the grayish ground (is that cement?). He has some cool gold tribal zigzags on his body, and his eyes glow red like hot lava. Santiago stands calmly in front of him, ready to tell him the plan. Huntik.com

Click here to view the full Gallery for Ponderous 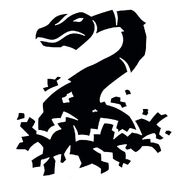 Ponderous
Add a photo to this gallery

Retrieved from "https://huntik.fandom.com/wiki/Ponderous?oldid=79138"
Community content is available under CC-BY-SA unless otherwise noted.