Start a Wiki
Powerdrain is a spell that directly drains the power of the target.

This spell was used by Unnamed Suit 026 on Dante Vale in New Grange Passage Tomb. Despite being in serious pain, Zhalia Moon was hesitant to intervene and Dante was save by Sabriel. S1E13

A red version of this spell was used by Mr. Mactavish of the Organization against Dante Vale. PRO-003

Powerdrain is used on Dante 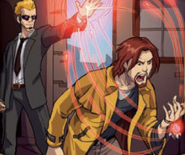 Powerdrain in the TCG
Add a photo to this gallery
Retrieved from "https://huntik.fandom.com/wiki/Powerdrain?oldid=79011"
Community content is available under CC-BY-SA unless otherwise noted.