Professor Rickman is a top operative of the Organization. He has two female minions called Celina and Bonnie. A collector of ancient relics, he is an old enemy of Dante Vale.

In the past, Professor Rickman fought the younger Dante Vale for an ancient native Mexican bowl. He won the battle by using his powerful Titan Wendigo and his own fight-skills. Dante appears to be still furious about that loss in the past. HC#10

Rickman came face to face with Dante many years later on a mission to get an ancient necklace, a mission given by The Professor himself. HC#10

Rickman later sent his agents, Celina and Bonnie to pursue Lok Lambert and Sophie Casterwill but they failed. Later, Rickman invoked Silver Hunter in to attack Dante in Quimper Cathedral. After defeating Dante's Solwing, it fought against Caliban who was sent back to his Amulet by Rickman's spell. Silver Hunter knocked Dante to the floor but was turned to stone by King Basilisk before he could finish him off. Rickman later arrived at Ys with back up from his team and Captain Caine. HC#11

Rickman summoned Silver Hunter in the underwater city of Ys, to hunt down Dante, but it was defeated by Dante's Metagolem. He then invoke Wendigo, reminding Dante of how he first beat him, but he was knocked unconscious by Dante and arrested by the Huntik Foundation along with Celina, Bonnie, Gregor, Captain Caine and Ford. HC#12

Rickman's combat abilities are able to overpower those of Dante's showing him to be a formidable and powerful enemy. 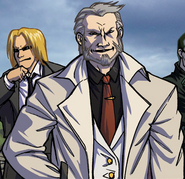 Add a photo to this gallery
Retrieved from "https://huntik.fandom.com/wiki/Professor_Rickman?oldid=79714"
Community content is available under CC-BY-SA unless otherwise noted.