Start a Wiki
Psikofen is a mummy-like Hecto-Titan who, through the use of his deadly chains, can ensnare enemies or violently tear through solid structures, making him a dangerous and formidable opponent. Closely related to the Titan Marauder, Psikofen is used by Marduk and the Casterwill Hunters of the Blood Spiral.

Pskikofen was invoked by a Casterwill Hunter when the Huntik team were ambushed just after landing their plane. After destroying the plane, Psikofen battled against Ironsquire and Kelpie. Though Psikofen gained the edge in the battle, he was defeated by Cherit. Another Psikofen was used by Marduk to attack the team in Nostradamus's tomb. He battled Dullahan and Elf King Oberon and sabotaged the team's plans but, after a fierce fight, he was defeated by Powerbonded Baselaird. S2E49

During the battle at the Spiral Mark, Psikofen was invoked by a Casterwill Hunter to fight against the Huntik Foundation and Casterwill family. Psikofen was able to capture Lane and render her unconscious. S2E51

Psikofen's strength lies in its ability to use its chains as weapons, often targeting his enemies by the ankles so as to demobilize them before moving into finish them off. The power Psikofen has in controlling these chains mean he is strong enough to single-handedly destroy a plane and can capture enemies as strong as Baselaird.

As per the Gallery Policy, the full set of images for Psikofen may be found at the Category Gallery. 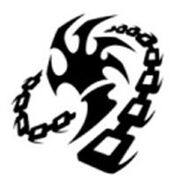 Psikofen
Add a photo to this gallery

Retrieved from "https://huntik.fandom.com/wiki/Psikofen?oldid=79457"
Community content is available under CC-BY-SA unless otherwise noted.