Rassimov was the leader of the Blood Spiral and was a terrifyingly powerful and cunning Seeker. For years, he worked undercover as the Professor's lackey in order to weaken the Organization from the inside, all the while following the orders of the Betrayer in their plan to call back the Nullifiers to Earth and wipe out all life.

Rassimov was a ruthless seeker with a hidden agenda, which became apparent after he fell into one of his own traps on purpose. There, he met up with his family in the Blood Spiral Brotherhood, who had been planning revenge on the Casterwill family. S1E26 Based on his intense hatred for the Casterwills, he was believed to be connected to the Nullifiers whom Casterwill defeated. He was physically strong and possesses a command of dark spells and Titans, making him a match for Dante Vale's whole team. S1E20 S1E21

After the Professor´s defeat, Rassimov made his return in Klaus' bookshop, as the leader of the Blood Spirals. He attempted to eliminate Dante but was stopped when the latter powerbonded with Caliban. He and his forces then left with the Amulet of Void but not before completely destroying the lab. S2E32

Rassimov began searching for new members for the Brotherhood and sent his minions to hunt the Casterwill family, while he talked with the Betrayer on his throne. S2E33 S2E35 S2E39

Rassimov traveled to the Tomb of Tutankhamun in Egypt with Harrison Fears to recover the Necklace of Tutankhamun. He was then ambushed and arrested by the Huntik Foundation his Amulets all unbonded and locked away by Dante and his Sorrowbond power. However he was rescued by Harrison and, revealing the true extent of his power, summoned the Legendary Titan of War, Legion. Defeating the Huntik team, and destroying the Amulets of Lindorm and Solwing, Rassimov escaped with the Necklace. S2E47 The team took time to recover from this defeat, staying at the Lambert house in County Kerry, Ireland. S2E48

On the longest night of the year, Rassimov prepared the ritual to activate the Spiral Mark by summoning the Nullifier scout, Void. S2E49 When Dante and his team arrived, Rassimov announced he would deal with them personally, summoning Legion. However he was defeated by Dante and Legion destroyed by Lok and the Willblade. Following the revelation that the Red Comet had changed course to hit the spot of the Spiral Mark, Rassimov revealed his own scheme to double cross the Betrayer and the other Spirals, planning to control the Nullifiers with the Necklace of Tutankhamun. However, his plan failed when the Necklace was disintegrated and he died in the subsequent collision with the Comet. S2E50

From the beginning, Rassimov appeared to be a very loyal follower of the Professor. In the Organization, he was known for completing all of his missions successfully, the Professor even called him the perfect operative, stating that he had successfully completed over a hundred missions without failure. S1E20 His cold personality and cruel demeanor made Rassimov a force to be feared. He later revealed that his loyalty was merely a facade and that he was actually a member of the Blood Spiral Brotherhood.  S2E32 It was partly due to his actions that the Professor lost in battle, giving Dante the Amulet of Archwarder. S1E25 But even so, Rassimov thought of obtaining power only for himself, and he betrayed the Brotherhood he has claimed to lead, ultimately leading to his own downfall. S2E50

A Seeker of devastating power, Rassimov possessed a range of dark abilities that were unsettling just to watch. The spells he generally favored were based on obliteration and consigning things to nothingness, along with other powerful Blood Spiral spells, his strongest being the deadly Darkvoid. S1E18. A master at hand to hand combat, he was able to overpower Dante in battle. S1E19 Rassimov also possessed a vast arsenal of ancient Egyptian Titans, most notably the sinister Thornment and majestic Kopesh. S1E21 As a last resort, he had the devastating Legendary Titan of War, Legion, hidden within his body, given to him by the Betrayer himself. S2E47 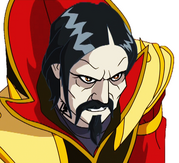 Rassimov as leader of the Blood Spiral
(Season 2 Outfit) 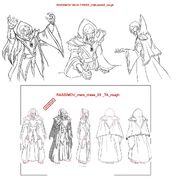