Red Vampress is a blue-skinned Draco-Titan. Like her vampiric name suggests, she dons a high-collared red and black vampire's cloak. Her Amulet is in the possession of Celina, a minion of Professor Rickman.

Red Vampress was invoked by Celina in the underwater city of Ys alongside Bonnie's Gheisha. She fought and defeated Dante Vale's Freelancer. However the tables turned when Zhalia Moon arrived and Red Vampress was defeated by King Basilisk. Her Seeker, Celina, was then arrested by the Huntik Foundation. HM#12

Red Vampress can fight aggressively, with her razor sharp fangs and claws being lethal enough to send an enemy Titan back to its Amulet. 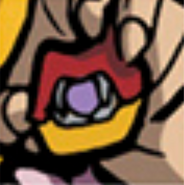 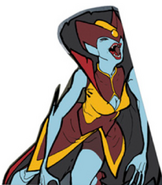