The Riderless Chariot is a blue Krono-Titan chariot driven by two blazing, yellow horses. It is a fast Titan with a will of its own, and it has a tendency to rush forward to crash into its enemies.

Riderless Chariots have served as the Titans of powerful warlords throughout history, gaining the moniker of the ultimate Seeker transportation. Huntik.com Many heroes also have made use of Riderless Chariots for thousands of years. SAS-067

One Riderless Chariot was used by the Huntik Foundation which Cherit struggled to keep to up with. SAS-067

The Riderless Chariot is an immensely fast Titan who is thoroughly armed with both blades and trip wires, and the chariot may be mounted through its Taxi ability by average-sized Titans for more firepower. Because the horses perpetually burn, their fire can be used offensively to burn enemies or defensively to hold back enemies. Huntik.com

Based on the horse-drawn chariots of the Greeks and Romans, The Riderless Chariot was designed as a chariot adorned with heroic carvings. The horses pulling the chariot then were given fiery hooves and manes. Further into the design process, the horses were made to be sleeker and were given harnesses. Huntik.com 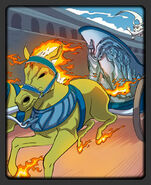