Riverjaw is a Meso-Titan that resembles a green-skinned crocodile whose body is garnished in jewelry and carvings that symbolize her Aztec heritage.

Riverjaw was known to the Aztecs as a territorial river spirit who prefers to lie in wait for her prey to come to her. SAS-068

Riverjaw is a strong swimmer with powerful jaws, as befits a crocodile. However, she prefers to wait for her prey to come to her, and is therefore slow and reluctant to move. SAS-068

Riverjaw is a crocodile-themed Titan. Because we already have another crocodile-themed Titan (Ammit Heart-Eater) in the world of Huntik, we wanted to make Riverjaw different enough that people wouldn’t confuse the two. Ammit is a big squat Egyptian Hecto-Titan, so we made Riverjaw a sleek Aztec Meso-Titan and decorated her back and bracelets with Aztec-style carvings. This sketch looked a little too much like our first sketch for Ammit’s card, so we asked the artist to change her angle so the cards would look different. Huntik.com

Quite a change! Now you can definitely see the detail in her items, and her jaw is obviously longer and more graceful than Ammit’s ugly mug. One subtle but important difference between the two reptilian-themed Titans is their eyes—Riverjaw has large human-like eyes, while Ammit’s are red and mean. Huntik.com

Adding color to the picture really makes a difference, and now there’s no way brown-colored Riverjaw could be mistaken for green-gray Ammit! The jungle and building in the background also have a very Aztec feel to them. They’re pictured to show that she’s on her home turf. Huntik.com 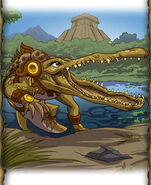