Start a Wiki
Ropetrick is a spell used to manipulate pieces of rope and is manifested through a yellow aura. This spell is highly versatile and can be used for tying knots, binding enemies, or saving falling allies.

This spell was used by Eathon Lambert to help Simon Judeau save Metz from falling into a pool of liquid hot magma. S1E25

His son, Lok Lambert used this to distract an Enforcer S1E22

Dante Vale used Ropetrick in for Solwing to tie up a group of defeated Silent Soldiers. S2E39

Lok later used the spell to tie up Wind in the Phoenix Volcano. S2E45. 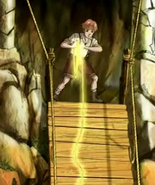 Add a photo to this gallery
Retrieved from "https://huntik.fandom.com/wiki/Ropetrick?oldid=88232"
Community content is available under CC-BY-SA unless otherwise noted.