Ryder was a member of the Organization and an old acquaintance of Zhalia Moon. He often worked alongside Ford and Gregor, bringing the stealth and cunning to their missions.

Ryder was being chased by Dante Vale and Cherit. He escaped his pursuers the Huntik Foundation, but  accidentally dropped a pouch containing some marbles, which Dante found. He later appeared at the hidden basement of the school, where it was found out that he was the one in charge of Ford and his gang. When Dante, Lok Lambert and Sophie Casterwill arrived, he fought Dante. Mysteriously, Zhalia Moon recognised him. When Ford thought that the treasure was gone, Ryder and the other Organization members retreated. He was later sent to spy on Dante's house. HM#01

Ryder accompanied Ford and Gregor to Barnsdale Forest in Yorkshire, England to retrieve Arawn the Hunter. After following the Huntik team to an old abbey, Ryder invoked Elegast and fought against Zhalia with both invoking their Kilthane Titans. After Lok obtained Arawn's Amulet, Ryder and the Organization retreated. HM#02

In Tel Aviv, Israel, Ryder used the power Dopplemorph to take the form of Gil, a Huntik Foundation researcher. He then met the Huntik team and, after they retrieved Ascalon, attacked them whilst they slept. He then fought Dante, invoking Elegast to fight Caliban, and detonated an explosive device on the boat. However the Huntik team were rescued by Zhalia and the real Gil, leaving Ryder to save himself. HM#03

During the carnival in Venice, Italy, Ryder invoked Shifter, using it to turn Belgrieve into Ryder's form. Ryder later took the Medallion of Saint Mark from Lok Lambert and escaped on the roofs of Venice. He was pursued by Zhalia but he reminded her that she couldn't attack him as they were. He then escaped with the Medallion. HM#05

During the rampage of Grand Dragon Leviathan in Venice, Ryder fought Zhalia with the both invoking their Strix Titans. They then shared a moment before Ryder dropped the bracelet for Zhalia to catch. HM#09

Ryder later traveled to the underwater city of Ys with Ford and Gregor joining Professor Rickman and Captain Caine in their fight again the Huntik team. However, Ryder double crossed the Organization and helped Zhalia defeat the Suits. He then tried to convince Zhalia to steal the treasures of Ys together but Zhalia, pretending to hug him, blasted him and watched as he fell from the roof of the building. HM#12

Unlike the usual Organization operatives, Ryder was extremely cunning and always had a trick up his sleeve. He and Zhalia Moon once had a romantic relationship in the past and the pair struggle with their feelings together, with Zhalia being unable to attack him. HM#05 Zhalia ultimately rejects Ryder and pushes him off a building in Ys. HM#12

Ryder's strengths lay in his stealth and agility. He appeared to be very quick as he could escape from Dante Vale. He was also a skilled fighter who was able to fight well against Dante on multiple occasions. His skills also matched that of Zhalia, with the pair sharing several Titans in common. 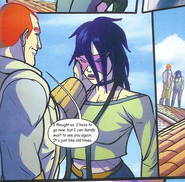 Ryder and Dante
Add a photo to this gallery
Retrieved from "https://huntik.fandom.com/wiki/Ryder?oldid=78818"
Community content is available under CC-BY-SA unless otherwise noted.