Salamandrake is a Meso-Titan who appears as a fiery green serpent with red markings on its head and large fangs. It is similar in appearance to and has the same base stats as Dambala.

Salamandrake is able light itself up like a beacon and can start large fires. Its 'Fire Burst' ability can disorientate weak Titans as soon as Salamandrake is invoked. 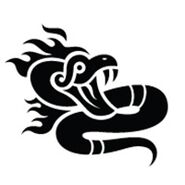 Salamandrake
Add a photo to this gallery
Retrieved from "https://huntik.fandom.com/wiki/Salamandrake?oldid=65931"
Community content is available under CC-BY-SA unless otherwise noted.