Start a Wiki
Sandra Lambert is a Seeker and retired member of the Huntik Foundation. The wife of Eathon Lambert and mother to Lok Lambert and Cathy Lambert, Sandra lives in County Kerry, Ireland.

Sandra met Eathon Lambert and the pair eventually married and had two children, Cathy and Lok. Eathon once took Sandra for a picnic in the valley of Tír na nÓg to which she gave him a smack as he had promised he'd retired from adventuring. S2E48 After Eathon disappeared, Sandra was left to raise her children on her own. S1E13

The Huntik team stayed with Sandra at the Lambert house while on vacation. Sandra spoke to Dante about how she missed Eathon and how she couldn't bear to lose Lok too. After the team traveled to Newgrange Passage Tomb with Scarlet Byrne, Sandra came to Lok's rescue and helped defeat Klaus' Suits. S1E13

Lok revealed to Cherit in the Tomb of Nefertiti that Sandra had got him a bird when he was six, contrary to the bicycle, baseball bat and toy he had wanted. This became key to solving the puzzle and recovering Eathon Lambert's puzzle. S1E15

The team stayed as Sandra's again after being defeated by Rassimov in Egypt. S2E48

During the final battle, Sandra secretly joined Scarlet as a co-pilot on a Scramjet despite being retired. S2E50 She was shocked to hear of Dante's death and joined the battle against the Blood Spiral. S2E51 During the final battle against The Betrayer, Sandra fought alongside Lucas Casterwill but both were paralyzed by the Betrayer's Shadowlock power. After his defeat, Sandra was freed and celebrated the triumph. S2E52

Sandra is a very caring person, and an even more caring mother. She will do anything to make sure her children are okay, and will protect them at all costs. She is quite upbeat, and like most mothers, she will happily embarrass her children in front of their friends. She also supports Lok's decision to become a Seeker even though she knows it is a dangerous profession. In her youth she seemed to be rather quick-tempered as she slapped Eathon for breaking his promise not to go to Tír na nÓg.

As a retired Huntik Foundation Seeker, it is assumable that Sandra has a vast variety of skills and Titans, namely Lunar and Solar. S1E13 She is also an excellent cook with Den Fears demanding four servings of her breakfast. S2E48 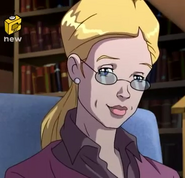 Sandra fights Enforcer
Add a photo to this gallery

Retrieved from "https://huntik.fandom.com/wiki/Sandra_Lambert?oldid=81510"
Community content is available under CC-BY-SA unless otherwise noted.