Start a Wiki
Shinobi is a ninja-like Yama-Titan whose exceptional stealth is heightened by his shadowy abilities. Shinobi's Amulet is the possession of Santiago.

Shinobi was invoked by Santiago to fight DeFoe's Kreutalk in the Huntik Foundation library in Venice. Shinobi then used a smoke bomb to give Dante Vale, Lok Lambert and Sophie Casterwill time to escape. S1E02

Shinobi was once used to intercept an Organization car by landing on its roof without making a noise. OAL-014

Shinobi was used by Santiago in the Great Rift Valley to fight Marduk and Midnight Rook during the Blood Spiral siege on the Fortress of Iron Will. S2E40

Shinobi is hard to see in full daylight and practically invisible in dim light. He can walk on shadow and smoke, and like all ninjas he is extremely silent. As a ninja, Shinobi carries two katanas to use in battle. He also carries smoke bombs to aid him and his Seeker whether in combat or in escape. He is fast and agile and is a dangerous opponent. 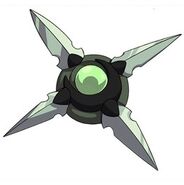 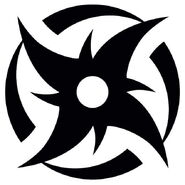 Shinobi
Add a photo to this gallery

Retrieved from "https://huntik.fandom.com/wiki/Shinobi?oldid=90036"
Community content is available under CC-BY-SA unless otherwise noted.