Silver Hunter was summoned by Professor Rickman at Skara Brae to hunt down the Huntik team. HM#10

Rickman invoked Silver Hunter in to attack Dante in Quimper Cathedral. After defeating Dante's Solwing, it fought against Caliban who was sent back to his Amulet by Rickman's spell. Silver Hunter knocked Dante to the floor but was turned to stone by King Basilisk before he could finish him off. HM#11

Rickman summoned Silver Hunter in the underwater city of Ys, to hunt down Dante, but it was defeated by Dante's Metagolem. HM#12

Silver Hunter is a ferocious hunter who pursue its prey with great speed and agility. It can jump great heights and attack with formidable spirit. Its fangs and claws are incredibly sharp and can rip an enemy to shreds. 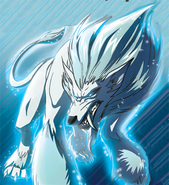 Silver Hunter
Add a photo to this gallery
Retrieved from "https://huntik.fandom.com/wiki/Silver_Hunter?oldid=79646"
Community content is available under CC-BY-SA unless otherwise noted.