Start a Wiki
Slitherfang, the serpent from the Nile, is a snake-like Hecto-Titan that combines attributes of the boa constrictor with those of a cobra. His rival is the Sun-based Hecto-Titan, Ra-Tet. This Titan appears to be related to another cobra Titan, Mucalin.

Slitherfang once attacked Lok Lambert, trapping him by constricting him with his body. SAS-048

Slitherfang is a highly dangerous Hecto-Titan due to its great size, its cobra-like venom, and its ability to constrict its enemies like a boa. 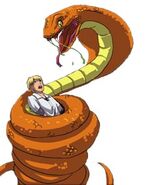 Slitherfang
Add a photo to this gallery

Retrieved from "https://huntik.fandom.com/wiki/Slitherfang?oldid=79124"
Community content is available under CC-BY-SA unless otherwise noted.