Stack was one of the members of Wilder's team in the Organization, working as his right-hand man. A highly skilled strategist and accomplished spy, he tried to infiltrate the Blood Spiral, but he was discovered and killed.

Stack and Wilder observed the Huntik team at the Organization Central through the cameras and planned to get rid of Dante Vale and his team. Later at the South American Forest, Peru, Stack attempted to ambush the Huntik team with his primary Titan, Dark Dryad, but failed. Later at the Nexus, Stack fought against Zhalia Moon but retreated along with the Organization, by using his Dark Dryad Titan to conceal their exit, when Lok Lambert managed to Powerbond with Baselaird. S2E27

Stack, along with Wilder and Hoffman, went to Salon Museum, which originally was Nostradamus' tower, to find his magical scrying glass. The Organization members bought tickets but, upon being discovered to be with the Organization, fought with Peter, Billie, and Melee Artist, though Stack was knocked out by a Raypulse Spell cast by Billie, the rest of the Organization managed to defeat the Huntik Foundation operatives. Stack later fought against Zhalia again at the tower after the Huntik team arrived but was defeated when the three Sentry Triclops were awaken and threw the Organization members out of the tower. S2E28

Soon after that, Stack and Wilder planned to ambush the Huntik team at Avalon after spying on them outside the Casterwill's cave. S2E29 With the Organization on the trail of the Willblade, Stack accompanied Wilder and Hoffman to Avalon. He then ordered Dark Dryad to return to her Amulet after she defeated Undine. Stack fought against Zhalia again outside the castle of Avalon but retreated with Hoffman once Zhalia's King Basilisk, after accidentally turning Dante to stone, returned him back to normal. S2E30

After capturing Lok Lambert, Sophie Casterwill, and Cherit at the Road of Alchemists in Prague, Czech Republic, Stack attempted to escort the three prisoners to Organization HQ, on Wilder's command. Stack's mission was interrupted when Dante and Zhalia arrived and were joined by Lucas Casterwill, Lane, and Dellix. Stack and his Suits tried their best to overpower Dante and Lucas team but nonetheless failed. S2E31

As both teams took interest in the Amulet of Void, Stack waited to ambush Dante and his team with his Titan, Dark Dryad, in Klaus's Bookstore. However, Stack was defeated by Shauna after the Blood Spiral suddenly dropped in through the skylight. S2E32

Sent by Wilder to infiltrate the Blood Spiral, Stack led the Spirals and Kiel to the resting place of the Amulet of Medusa on her island, attempting to capture her by using Divine Mirror Kagami, now given to him by Wilder, to reflect Medusa's Stone Gaze ability. However, Dante and his team arrived, allowing Lok to retrieve the Amulet of Medusa instead during the confusion of both teams fighting and after Stack and Divine Mirror Kagami failed to defeat and capture her. Stack then was captured and taken prisoner by Kiel. S2E35 He then was killed by Tantras in front of his students, including Zhalia as an undercover agent, to demonstrate what happened to spies. S2E36

Stack was an intelligent strategist and schemer who was determined to see the downfall of the Huntik Foundation. S2E27 As Wilder's right hand man, he was a loyal member of the Organization despite Wilder's poor and inane decisions and protected Wilder from oncoming attacks from the Blood Spiral's assault. S2E32 Stack's loyalty to both the Organization and Wilder ultimately cost him his life when he tried to infiltrate the Blood Spiral. S2E36

Stack specialized in espionage and in ambushing the opponent, using fast and agile attacks to take his opponents by surprise, with even Zhalia noting him for his speed. Stack also was quite intelligent and a skilled strategist. He often relied on his Dark Dryad Titan to ambush opponents. S2E27 S2E30 S2E32 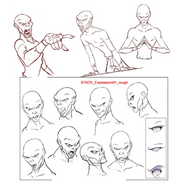 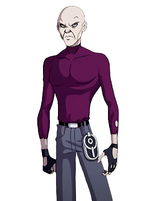 Stack at Wilder's side

Wilder and Stack
Community content is available under CC-BY-SA unless otherwise noted.
Advertisement