The stone golems guarded the Lodestone on an uninhabited Indonesian island. Despite only being able to use brute force, the golems were protected by an anti-magic field that prevented powers and Titans from being used against them.

These golems were encountered by Dante Vale's team in an underground maze on an uninhabited Indonesian island. Though originally disguised as mere chunks of rock, the golems became activated when the team entered the second room in the maze. Due to the Lodestone's anti-magic field, the team had to rely on Montehue to defeat them with his axes.

A second group of numerous golems, including a larger golem, was encountered by the team in a large chamber with golden walls. As the team fled, Lok Lambert realized that the Lodestone was housed at the entrance of the maze. He eventually used a stone golem to crack the Lodestone, permitting Lok to summon the Willblade to destroy the golems. S2E44

The golems in their stone form

Dante Vale versus a stone golem 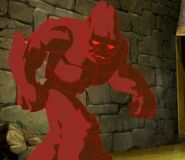 The largest stone golem
Add a photo to this gallery
Retrieved from "https://huntik.fandom.com/wiki/Stone_Golem?oldid=71737"
Community content is available under CC-BY-SA unless otherwise noted.