Stoneblade is a spell that manifests a moving blade of energy to send towards the target.

This spell was used by unnamed Suit 040 against the Amazons and later Sophie Casterwill when the Organization was after Hippolyta's Ring of Behemoth. S1E19

When Stoneblade was used by Grier while storming the Professor's castle, he instead manifested a yellow aura. S2E46 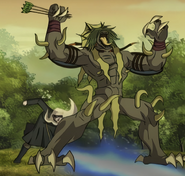 Add a photo to this gallery
Retrieved from "https://huntik.fandom.com/wiki/Stoneblade?oldid=70427"
Community content is available under CC-BY-SA unless otherwise noted.