Strikemode is a spell used by Klaus to make the spell's target become stronger. The spell manifests as a red and yellow ball of goo-like energy that is launched at the intended target.

Strikemode was used by unnamed Suit 011 on his Jokoul. This version had a violet aura instead of the usual red aura. SAS-125

This spell also was used by Klaus to power up Brahe's offensive abilities. S1E16 Klaus later used his engineering abilities to modify the the spell into Overmode. S1E17 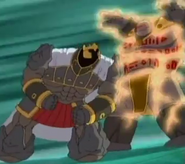 Brahe after being hit by Strikemode
Add a photo to this gallery
Retrieved from "https://huntik.fandom.com/wiki/Strikemode?oldid=70381"
Community content is available under CC-BY-SA unless otherwise noted.