The Sword of Saint George is a double-edged sword which was once used by Saint George and held the Titan, Lindorm, before the sword was buried in Silene, Libya.

Saint George used the sword to seal the Amulet of Lindorm before the sword was buried in Silene, Libya.

It remained there until unearthed by DeFoe and Grier on behalf of the Organization. DeFoe was meant to transport the titan to Organization Central, Prague, but instead took the sword with him to Greece, where Dante Vale was spotted, under the excuse they were having trouble unearthing it.

DeFoe used it in his assault on Dante's team, against orders as pointed out from Grier, after they surfaced a ship once used in the Argonaut fleet. DeFoe entered the ship, slashing the sword against Dante while using Poisonfang, Gar-Ghoul and Mindrone. During the fight, the sword was used to block a rebounded Poisonfang.

As Dante proved too strong, DeFoe used the sword to threaten Sophie Casterwill, forcing Dante to stand down. After a sneak attack from Lok Lambert, knocking DeFoe off balance, Dante grabbed the sword with Spidertouch and now held DeFoe hostage, forcing Grier and the Organization to retreat.

The sword then was given to Lok, who bonded with its Titan, Lindorn, after some effort. Doing so caused the sword to discolor, turning grey before Lok dropped it after bonding. S1E10

DeFoe with the sword 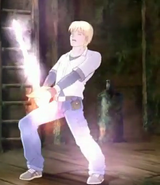 Lok bonding with Lindorm
Add a photo to this gallery

Retrieved from "https://huntik.fandom.com/wiki/Sword_of_Saint_George?oldid=77468"
Community content is available under CC-BY-SA unless otherwise noted.