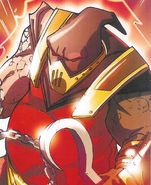 Is this a better profile image? (see Proposal #01)

I'd probably go for this one as, thus far, it is the only non-action shot we have of him from the comics. The main thing to work with, though, would be getting the right aspect ratio to work with the Infobox.
~ The Lhikan 634 (TaLk)

Ok, so this picture isn't good?

It would require cropping, but it's better than the other images we have of him. To get the right aspect ratio, it looks like we'd have to crop the scan to exclude his legs and some of the additional background at the top.
~ The Lhikan 634 (TaLk)

This picture has no leggs, I will search to one with leggs. --

Not quite what I meant. It's not really that bad if we have to crop them out (see Proposal #02). The likelihood of finding something of the quality of the stock art is less likely in the comics. If we can't find a full-body, non-action image, Proposal #02 will work. I know several other series-based and comic-based wiki's use similar quality images. I've gone ahead and switched out the image on the page to show how it looks in the meantime.
~ The Lhikan 634 (TaLk)

On the Huntik NX website, there are more images of Executioner, shall I give links?

I'm only seeing two images on NX, which we also have from the scans. Any additional images would likely be those that haven't yet been cropped from a comic scan.
~ The Lhikan 634 (TaLk)

Retrieved from "https://huntik.fandom.com/wiki/Talk:Executioner?oldid=47476"
Community content is available under CC-BY-SA unless otherwise noted.