I think he can travel people though time, I am not sure but in the 17th comic Viktor attacks Sophie and Lok, Victor is a corrupted Casterwill from the XVII century... However, this might be an Draco Titan instead of a Krono titan, It's amulet and summoning collors looks much Draco, Like. --

He can do this! "In this issue Lok and Sophie are hurled in the late XVII century by the legendary titan Kronos and must find their way back, eventually correcting the past to change the future."-[1]
--

The question of which image should bee used for the Infobox of Kronos been brought up. To be quite honest, neither is optimum. The available images are as follows: 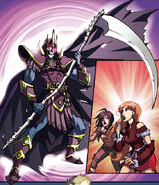 Proposition 2
Add a photo to this gallery

Proposition 2 is automatically overturned as Proposition 1 more closely resembles stock art in that no background is present. The main negative, however, is the angle. Thanks to Sophie and Zhalia, we can't just edit out the background of Proposition 2. I'm currently having issues with viewing the Huntik comics. Are there more images of Kronos in Issue #17?

Maybe you can find something here?

I'm afraid I wouldn't know. I'm completely unable to view Devintart thanks to dorm internet. Our provider randomly decided to block Deviantart (and the Spider-Man Wiki).
~ The Lhikan 634 (TaLk)

Thats annoying, if I got time, I will upload all pages to this wiki.

Here they are, only the ones with Krono's on it

Yikes, that doesn't leave too much to work with, then… Page 10 isn't too great. Page 11 has a fairly decent body image (lower-right) where nothing is cut off for dramatic effect. I think it's either that one or File:Kronos.jpg. Both of those images can be cropped to remove other characters, which is better for an infobox image.
~ The Lhikan 634 (TaLk)

Maybe I can get a better one, as there are some German comic scan's online. --

Is that really Kronos's icon?

*sigh* This is the third time he's done this as well. He knows he isn't allowed to do this as it violates not only the Image Policy but also copyright law. ~ The Lhikan 634 (TaLk)

Retrieved from "https://huntik.fandom.com/wiki/Talk:Kronos?oldid=66896"
Community content is available under CC-BY-SA unless otherwise noted.