Tantras is one of the core members of the Blood Spiral as a member of the Blooded Circle alongside Wind and Shauna and ranked under only Rassimov. His task is to recruit and train new members for the Blood Spiral Brotherhood and he is sometimes sent on special missions. He both raised and trained Kiel, and he is also a parental-figure for Harrison Fears.

Tantras was a member of the Blooded Circle within the Blood Spiral. He raised and trained his pupil, Kiel, to be the best among the Casterwill Hunters. A full servant of chaos, Tantras is a master seeker who devotes all his time to teach his students the way of the Blood Spiral.

In Rotterdam, Tantras started recruiting a new order of Silent Soldiers from the orphanage where Zhalia Moon had once lived. Harrison Fears and the other boys became Silent Soldiers, while Den Fears ran away and joined the Huntik Foundation. Tantras then had his students attack Lok Lambert and Sophie Casterwill whilst he fought Zhalia Moon with his Titan, Jericho. After losing the battle, Tantras welcomed Harrison into the order. S2E33

Tantras sent his hunter, Kiel, to Medusa's Island to oversee Stack on his promise to deliver the Blood Spiral the coveted Titan, Medusa as proof of his allegiance. S2E35 After Stack was exposed as a spy, Tantras callously killed him in front of his students as an example of what happened to those who crossed them. He later led his students to find Den Fears to take revenge on him abandoning the order. He fought against Dante Vale but chose to retreat after seeing the power of Powerbonded Lindorm. He then appointed Zhalia Moon as Harrison's bodyguard. S2E36

On the journey to the Fortress of Iron Will, Tantras caught Zhalia informing Dante Vale of the Spiral's movements via Logosbook. Having already suspected that she was a spy, he attempted to eliminate her but his memory was wiped by Zhalia's newly Powerbonded Gareon. S2E39 During the siege on the Casterwill family, Tantras used Bazela's Hive to spawn Bazela's Insect to carry his forces to the top of the cliff. Tantras told Kiel to fulfil his destiny and invoke his ultimate Titan, Efreet King, whilst he was detained by LeBlanche. After Focauld and the Rue Guardian activated the Fortress' defenses, Tantras ordered the army to retreat. S2E40

After taking over the Castle of Vlad Dracul, Tantras tried to use the power of the Heart of Vlad Dracul to activate the Spiral Mark himself. Despite nearly succeeding, he was foiled by Dante Vale and Ignatius and The Heart of Vlad Dracul drained Tantras of all his powers. S2E43 He was left in a weakened and bedridden state, and because of that he left both his most powerful Titans, Jericho and Bazela's Hive, and his place in the Blooded Circle to Harrison Fears. S2E47

Tantras is the typical crazed fanatic. He strongly believes in the Blood Spiral's ideals and would do anything to bring chaos to the world. He is cruel and merciless, prepared to kill spies in front of his students so as to set an example, as seen when he murdered Stack S2E36 and attempted to kill Zhalia Moon after discovering she was a spy. S2E39 He treated his minions like his tools, even opting to sacrifice them in order to kill Dante Vale. S2E36 Tantras, however, is too blinded by his ideology to care about small failures and even, himself, did not discover the journal of Zhalia Moon until late in the game. He possesses great pride in himself and the Spiral, believing that chaos will ultimately triumph over the world. When he is unable to win fairly, he uses his trickery to achieve his goals. However, like Klaus did with Zhalia, Tantras showed a certain amount of kindness to Harrison Fears, treating him with respect and some fondness. This was shown when he approved of Harrison's decision to take his place in the Blooded Circle, and when he gave the boy his titans. S2E47

Tantras possesses a vast repertoire of dark powers and, despite his age, was capable of holding his own against Dante Vale in battle. He uses staff both in direct combat and channel his spells. His knowledge of the dark forces make him a tutor of the highest order, training Kiel and, later, Harrison Fears to become extremely powerful Seekers under his guidance. In addition to being a great fighter, he can also sense the feelings of his men. All this, combined with his insanely destructive resolve make Tantras a formidable enemy. 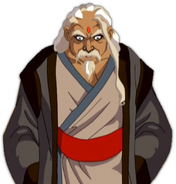