The Temple of Thor is a building dedicated to the ancient Seeker, Thor. Thor's hammer, Mjolnir, was kept here and guarded by the Guardians of Thor prior prior to being retrieved by Dante Vale, Tersly, Lok Lambert, Montehue, Zhalia Moon, and Sophie Casterwill. The only way to get to the temple, aside from flying, is to utilize the Rainbow Bridge. The temple is laced with magic and kept the wild Titan, Fenris, constantly invoked for thousands of years.

Upon entering the temple, there is a large dome chamber with two additional passages. Down one path there is a sealed door which leads to a forbidden potion located underneath the temple. This path leads directly to the stone snake chamber. Upon entering the this chamber the titan Fenris is released on whoever entered. The stone snake chamber has a door, which leads to the Mjolnir chamber. The only way to open it is by moving the snake to form an infinity symbol, a figure eight, with its tail in its moth. Past this chamber is a chamber containing the Rope of Gleipnir, the only thing capable of defeating the wild Fenris.

The second passage leads to the stone snake chamber as well, but through a series of smaller chambers and hallways.

The chamber which contained Mjolnir has a large stone pillar in the center, with the hammer Mjolnir on it. Surrounding the pillar were dozens of floating rocks with lightning bolts striking them at random. To reach the hammer, Dante and Montehue had to climb the rocks and avoid the lightning. S1E08 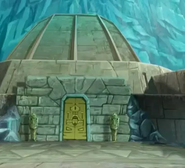 Add a photo to this gallery
Retrieved from "https://huntik.fandom.com/wiki/Temple_of_Thor?oldid=64289"
Community content is available under CC-BY-SA unless otherwise noted.