Thunderok is a powerful, winged Draco-Titan with blue skin and armor. He resides in a guitar, in contrast to most other Titans who instead reside in Amulets.

Thunderok's Amulet was sought by the Organization, who had Todd kidnapped to gain its whereabouts. Thunderok eventually was used when the Huntik Foundation team rescued Todd. He defeated Lee Roy's Bonelasher and Executioner. HC#15

Beides being able to fly, Thunderok can fire blasts of hot energy from his mouth. 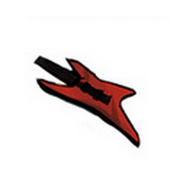 Thunderok
Add a photo to this gallery
Retrieved from "https://huntik.fandom.com/wiki/Thunderok?oldid=72865"
Community content is available under CC-BY-SA unless otherwise noted.