Tolivane are small, fairy-like Titans somewhat resembling moles. Although their base stats are relatively low, their "Defense" ability allows them to survive attacks which would normally send them back to their Amulets.

Tolivane were strange fairy-like creatures of European folklore that were helpful to good people and wicked when serving evil folk.

A Tolivane Amulet was once in the possession of Dante Vale and was given to Montehue in their youth. S1E08

Tolivane was invoked by Montehue in the Temple of Thor to hold off the Guardians of Thor in order to allow Montuehue and Dante time to utilize Mjolnir to defeat Ymir. S1E08

Another Tolivane Amulet is in the possession of a Suit named Charlene Hubbs. She used her Tolivane to obtain food at a restaurant, thus frightening the other customers. OAL-066

Tolivane is able to roll and bounce like a ball at top speed. Also, Tolivane can withstand a certain number of attacks before he returns to his amulet. Montehue calls this his "Defense" ability. 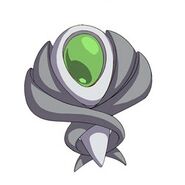 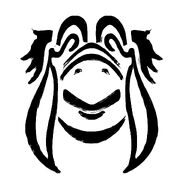 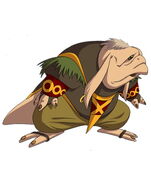