Tremayne is a four-armed, green-skinned fairy that is constantly causing mischief. With her dragonfly-like wings, she is easily able to exhaust those who chase her.

Old Irish legends speak of Tremayne Titans as the Sidhe, fairies that pulled pranks on people. Due to her ability to put people to sleep for many years, her mischief is thought to have been the reason why Rip Van Winkle fell asleep for twenty years.

Tremayne is not an offensive-based Titan, so she uses her abilities instead to escape. When she is unable to escape by flight, she can use the potion in her magical cup to put her enemies into a deep sleep.

Tremayne is a four-armed fairy Titan that is always up to some kind of mischief. We wanted this picture to show a smart Titan with a bit of an attitude, and the artist’s sketch shows hints of that in her face and posture.

You can see Tremayne’s dragonfly wings (the greenish wings that are barely visible mean she’s flapping her wings really fast). You can see that she’s holding are a wooden cup and a burning torch, and she’s wearing jewelry like the ancient Celtic people of the Ireland wore. Tremayne has four arms, so nobody’s going to think she’s human, but we wanted to go the extra step, so we asked the artist to give her green skin.

And here she is with green skin. Green is a common color for Gaia-Titans and green is often associated with the Irish, so we have two reasons to make her green. She also has red hair, a common hair color in Ireland. We didn’t want this to be a “fairy in the forest” kind of picture, so we had the artist put her in a city, like someone had just summoned her. Huntik.com 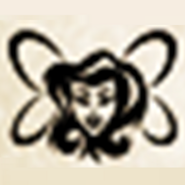