Triton is a Krono-Titan that resembles an armored merman. Contrasting with his evil counterpart Dark Triton, Triton wears a golden helmet and shoulder-plate.

Three Triton Titans belonged to the famous Alexander the Great who founded the coastal city of Alexandria during his conquests. Along with Dark Triton, the three Tritons guarded the lighthouse of ALexandria inspiring the legend of four juggernauts guarding the structure. After Alexander's death, the three Triton Amulets were buried beneath Alexandria in the depths of the ocean along with the fourth Amulet of Dark Triton. HM#04

Many centuries later, the Triton Amulets were recovered by Sophie Casterwill, Lok Lambert and Dante Vale after they each solved one of the numerous riddles left by Alexander. However they were soon attacked by Captain Caine who had recovered the fourth Amulet, Dark Triton. Lok and Sophie invoked their Tritons to fight Dark Triton and Megladeath. Dante gave his Triton Amulet to Zhalia Moon as only Seekers carrying a Triton Amulet could pass the barrier back to the surface. Dante then subsequently escaped by using Metagolem to break through the force barrier. HM#04

Like his counterpart, Triton is a powerful swimmer and warrior of the sea, specialized in fighting underwater and armed with a trident on his right arm to fight off enemies. 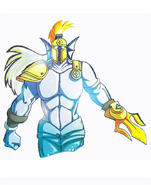