Unnamed Suit 001 was a Suit working for the Organization. He was one of the group's operatives working under DeFoe out of Venice, Italy.

This Suit attacked Lok Lambert and Sophie Casterwill to retrieve the Eathon's journal. He invoked a Mindrone and was a part of the team that cornered Lok outside of Dante Vale's house. This Suit was defeated when Dante Vale intervened and defeated the Titan with Solwing. S1E01

He was one of the many Suits called in by DeFoe to stop Dante Vale, Lok Lambert, and Sophie Casterwill in the Venice Huntik Library. This Suit, along with the others, was defeated by Dante's team and Santiago. S1E02 They did, however, acquire the Foundation's clue regarding the Golem, and his team of Suits gained Jodis Lore's Key for the Organization. S1E03

The team was later sent to Rouen, France, to retrieve Gar-Ghoul. S1E04 However, they missed the more important information on the Ring of Arc and were then sent by the Professor to Paris, France, following Dante's team into the Paris Catacombs. S1E05 However, his team was unsuccessful at retrieving the Ring. S1E06

As per the Gallery Policy, the full set of images for Unnamed Suit 001 may be found at the Category Gallery. 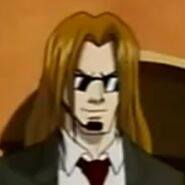 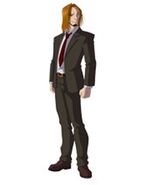 Add a photo to this gallery
Retrieved from "https://huntik.fandom.com/wiki/Unnamed_Suit_001?oldid=79749"
Community content is available under CC-BY-SA unless otherwise noted.