Unnamed Suit 024 is a Suit within the Organization. He operates from Sutos Island, Aegean Sea, under Grier.

This Suit was recruited by Grier after DeFoe's removal from the Organization. S1E11

He accompanied Grier in claiming Sutos Island under the Organization. Under this team of Suits, the people of Sutos were registered, and peace from civil war was brought to the island. Unnamed Suit 024 and his team were led into a trap by Lok Lambert and Sophie Casterwill. This Suit invoked a Mindrone Titan to fight the two, and the team nearly overwhelmed the Foundation members. The fight was cut short by Dante Vale and Grier, who had reached a truce. S1E12

As per the Gallery Policy, the full set of images for Unnamed Suit 024 may be found at the Category Gallery. 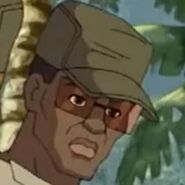 Grier's Suit team
Add a photo to this gallery
Retrieved from "https://huntik.fandom.com/wiki/Unnamed_Suit_024?oldid=62246"
Community content is available under CC-BY-SA unless otherwise noted.