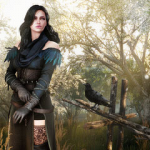 This is your user page. Please edit this page to tell the community about yourself!

reasons:
Dante: Well isn't it obvious? He is almost perfect, but still not too grand and Gary Stuish he does have limits and Messiah complex, he is sometimes too indulgent with people, allowing them more than he should, a bit of softy I would say.He will rarely or never scold and take side of his teammates even of they're wrong. He also would sometimes do the dirty work and let the others have splendour.Too tolerant sometimes.
Zhalia: She has flaws, is sometimes too unsure of her own potential and value, can be rude but still is kind, gets attached to people she loves and will do all for her friends and love. She has nobility often greater than those of noble birth.
Casterwill Squad: Ok. firstly why I like them as a team? Because of their system.

I know it is old fashioned and maybe cliché but why tamper over the winning system? Now my reasons for liking them as characters:
Lucas: he is really sweet. Ok, he was a bit harsh at the beginning but that's because he was worried and desperate. He doesn't think his sister worthless, he complimented her in Chasing Void. He did it when she deserved it. He cares about her it is seen clearly when she gets hurt or is in danger. He doesn't want her to get involved because he knows the dark side of knowing secrets and being part of the family which is being chased and killed. Who would want it for their sister? He also gave her the most true evidence of brotherly love. He cares for her so when he found out she is alive he must have wanted to contact her, but he didn't so she could be safe and live her life. That's rather selfless in my mind. Pushing away your wishes for somebody else's happiness. He might not be a fighter but even though he didn't believe the cause he went after his friends to help them fight. Enough said. So overall he isn't that much of a jerk. Proud and sometimes too harsh? Yes but never a complete jerk and coward.
Lane: she is simply cute...she reminds me of a pixie. She seems to be the one who cares about everyone in her family, worries about them. I just can't help but see her as this kind of person that despite of being frail and lacking of physical strength would stand up to bullies and defend the weaker ones, of course getting beat up herself. Small but with fiery spirit!.
Dellix: well, he is temperamental and hot-headed which gives him some charm he is also loyal and does not fear to tell Lucas off. He thinks for himself.

2.Lok...: he was ok in s.1 and in first parts of s.2. Cute, naive, clumsy. Certainly not the hero type, gets easily bored, doesn't like to learn and is too loud but does well with puzzles and has his heart in right place.
3.Teien C: She is cool, mysterious, smart and well I like Japan :D The Samurai/Kunoichi girl.
4.Monty: Dante's rival and friend, cocky but funny and loyal. He and Dante are just best friends that would do anything for eachother!

They are this kind of opposite sides pair. "I fancy you, and if we weren't adversaries right now..." with a lot of tension and witty remarks. He is handsome and quite arrogant she is independent sometimes too much and often sees him in different light, tries to ignore him. They fall in love and complete each other, respect their own decisions but know limits and run to each other's rescue. They need one look and see it. They're grown love.


So yeah they are in Casterwill team and refereed to as such but they're not nobles, they're not related to each other. So why not? There is little of them for evidence but something is there. They have a lot of scenes and panels together. They stand very close, and seem to be comfortable around one another and have similar ideals and ideas like fighting the Blood Spirals and helping other Casterwills. They listen to each other more than to Lucas. Lane followed Dellix and he listened to her in ep.18 when she hushed him and didn't even argue much with her.
Also very much like DxZ opposites but in a different way. Their side and principles are the same, they're not competing, but still it's ying/yang. He is this tall, muscular and impulsive warrior, rebel who fights in close distance battles, relies on his physical strength and sword. She? Frail, thin, petite girl, close to nature, meek(well meeker than him) girl. Maybe a bit of tomboy but not too much. He would be there to keep her safe from harm, she would keep him safe from trouble and deal with spells, and titans attacking him from afar. Good combo? Yes.

Retrieved from "https://huntik.fandom.com/wiki/User:NinaVale?oldid=70698"
Community content is available under CC-BY-SA unless otherwise noted.